Do While Loop in Java | Example Program

The do-while loop in Java is a variant of the while loop. This is the same as the while loop, except that the body of the loop is executed first, and then the loop continuation condition is evaluated.

However, sometimes it is necessary to execute the body of the loop at least once before running the test. These situations can be handled by using the do-while loop in Java.

The do-while loop always executes its body at least once before evaluating the test, because the conditional test expression is at the end of the loop.

The general syntax of the do-while loop in Java is as follows:

// Initialization:
do {
// body of the loop;
statement(s);
increment/decrement;
} while (check the conditional expression) ;

A block diagram of the do-while loop in Java is shown in the following figure. 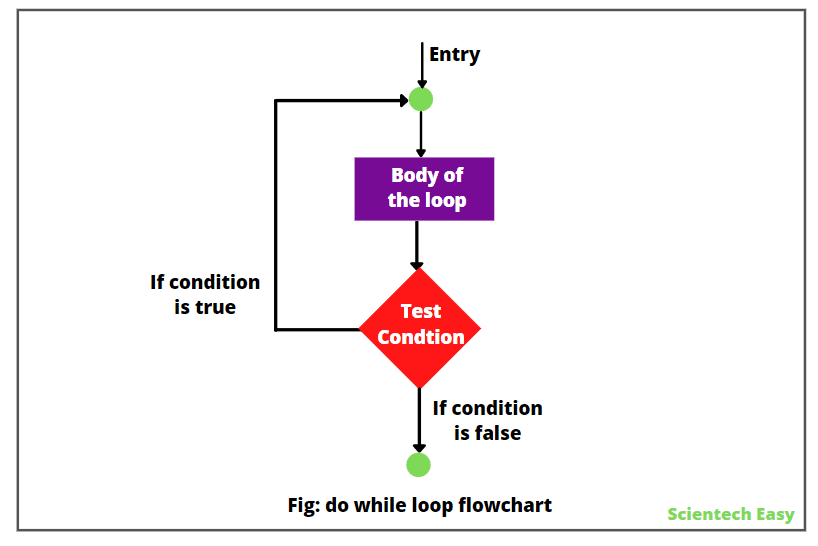 The flowchart of the do-while loop shows that first the body of the loop is executed, and then the conditional expression of the loop is evaluated to determine whether the loop should continue or end.

If the evaluation is true, the loop body is executed again. This process continues until the test condition becomes true.

If the specified condition becomes false, the loop is interrupted, the execution control exits the do-while loop, and continues with the next instruction, which appears immediately after the while instruction.

Since the specified condition is checked at the end of the loop, the do…while loop is an output-driven loop. The test condition must be a boolean expression.

We don’t need to use braces if there is only one statement in the do…while loop.

In this example, the body of the loop is executed until one of the two relations becomes true.

1. Let’s take a simple example of a program in which we want to represent numbers from 1 to 6.

a. In this example, the value of x is initially set to 1. Therefore, the number 1 is displayed.

c. Since this condition is true, the output thread returns and the value of x is printed on the console, i.e. 2.

d. Then the value of x increases again and becomes 3. Since 3 is also less than 10, the thread goes back and outputs the value of x.

e. This process continues until the value of x is less than or equal to 6.

f. Since the value of x is greater than 6, the condition is false and the loop is interrupted.

2. Here is another example of a program based on the do while statement, in which we display a multiplication table.

In this example program, the do-while loop has a nested form and produces the following result.

// Create an object of the Scanner class to receive the input data.
Scanner sc = new Scanner(System.in) ;

Difference between the while loop and the do-while loop

The difference between while and do-while loops in Java is the following:

1. In the while loop, the test condition is checked first, and then the statements in the while block are executed.

In the do-while loop, the operators in the do block are executed first, and then the test condition is checked.

2. If the test condition is wrong the first time, the instruction block is executed zero times.

The first time the test condition is false, the instruction block is executed at least once.

In the do-while syntax, the while statement is at the end.

I hope this tutorial covers almost all important points regarding the do while loop in Java with some example programs. I hope you understand this simple subject.

In the next lesson, we will learn about the for loop in Java using an example program.
Thanks for reading!!!

This source has been very much helpful in doing our research. Read more about java do while loop with user input and let us know what you think.

Do While loop in Java examples?

How do you write a while loop in Java?

How do while loops work in Java?

The Java programming language is object oriented, meaning that the program is treated as a set of objects that interact with each other. One of the most popular ways of programming object oriented code is through the use of while loops. While loops are used to repeat a certain block of code a certain number of times. A while loop allows you to keep repeating a chunk of code until a certain condition is fulfilled. The structure of a while loop is as follows: The code within the while loop is called the loop body. It is executed repeatedly until the condition becomes false. The condition in the while loop is called the loop test , and is normally written as a boolean expression. The loop test is usually placed right after the while keyword, and it is normally followed by a statement to be executed each time the loop is run. The until keyword is used to create a while loop with the inverse logic: it runs its body if and only if the loop test evaluates to false.